Thanks to the continuing generosity of John Wilson, we have been able to set up a Scholarship Foundation in his late wife’s name, to support teachers and pupils in pursuit of their education.

Janet Wilson started life as a Nursery Nurse before qualifying as a teacher, with particular interest in Early Years and Year One, and taught for many years in both Coulsdon and Bexhill. Janet was passionate about the work of the Yellowmen and believed that all children should have access to a quality education. Her support has enabled the Yellowmen to impact the lives of both children and community.

During the September visit, four pupils were each given a small monetary award and a book in recognition of their devotion to learning. In addition two teachers received a sum of money, part of which is to be spent on their school and part to fund their own further learning.

Two boys in Form 4 at Sigor Mixed Secondary (Francis Juma and Victor Poisho ) received awards for their efforts, in particular their progress in English.

Nancy Karani, Head teacher of St Patrick’s ECD, received an award for her great leadership qualities and her outstanding teaching which have contributed to the success of her school. One of her pupils, Elkana Pchumba received a scholarship award for his diligence and enthusiasm. 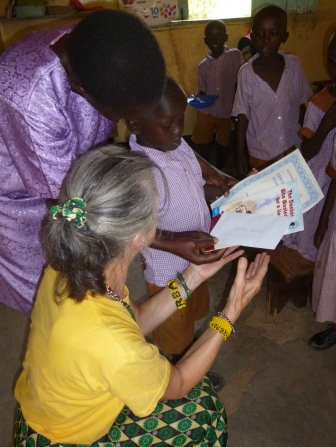 Peter Kirui, Head teacher of R. C. E. A. Marich Junior Academy received the second teacher award for his performance in the classroom and for the inspiring leadership of his school.

During the recent February visit Fridah Lortangole, a dedicated teacher at Marich Pass ECD Centre (Nursery School) was a well deserving recipient of an award. As you can see from the photograph below Fridah, whom we have known for well over five years, teaches in very difficult circumstances. Her little children have their lessons under a blazing sun, with a modicum of shelter provided by the acacia trees. Her teaching resources are a piece of chalk and a blackboard. Nevertheless, she manages to teach these children (through song and the blackboard) their alphabet and basic words and phrases in English and Kiswahili, as well as other subjects including maths.

Her delightful manner, her obvious engagement and her genuine care for her children ensure they receive the best start they can in their schooling. For her dedication to her profession Fridah was an outstanding candidate for the Janet Wilson Award and Linda had great pleasure in presenting the certificate and money to her. We hope in the near future to be able to support Fridah and the ECD unit by securing funds in order to build a classroom for her children.

The second recipient  was Arnold Simiyu, Head teacher at Sigor Mixed Secondary School. Like Marich Pass Primary and ECD School, Sigor Mixed Secondary School is a state school which receives minimal funding and where parents have to pay towards their children’s education. Arnold is outstanding as a leader and initiator because through his skills and inspiring personality he is building this school into a thriving community where the numbers of children enrolling has increased dramatically over the last three years. What has encouraged the involvement of the Yellowmen charity has been his policy of never sending home children whose parents cannot afford to pay the fees, which at times makes it difficult to resource everything that is required. Arnold is aware that if he should send home some of the girls in particular, it is unlikely that they would return as their parents may well decide that marriage is a better alternative for them. So, for his outstanding contribution to education and his constant encouragement of his students to achieve through learning, we decided that Arnold should be presented with a Janet Wilson Award to recognise his work. The presentation was made by Mike Stewart, in the presence all his students, staff and Chair of Governors, who supported this presentation enthusiastically and as tribute to man whom they admire and respect. 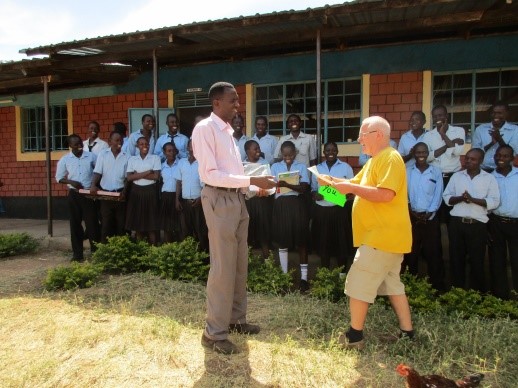 The awards for pupils went to Gladys Chepengut and Sharon Chelimo, both students at Sigor Mixed Secondary. We have observed with great pleasure their enthusiasm towards their studies over the last three years. They are now in Form 4 and are due to take their final examinations in October. Despite difficulties which we may find hard to appreciate, these girls have continued in education and are succeeding in their learning. Both very able students, courteous, hospitable and very proud of their school, they are fluent English speakers and therefore worthy recipients of the Janet Wilson Award. Unfortunately, Sharon was ill with a severe bout of malaria so was unable to receive her award on the day but will do so on her return to school. Nadia had the pleasure of presenting Gladys with her award.

On behalf of the schools in our region of Pokot County, we would like to thank John for his continued generosity and support for our education projects. It makes a real difference.