There was an advert on the TV a while back; I think it was an army recruitment website, showing soldiers delivering aid to refugees to some anonymous, war-torn state. In the advert, the refugees mob the army vehicle, scrambling for the food and aid that is being given out. It’s supposed to tug at the heartstrings and pose a dilemma for the soldiers: there isn’t enough food for everyone; what do you do?

We’re all familiar with the similar scenes from our TV screens, but I can tell you that it’s a different story when you’re faced with rows and rows of people, queuing for your help.

I first went to Kenya in 2007, then returned in 2011 and 2012. On my first trip, the clinic in Tikeet was under construction. Although a physically impressive building, I didn’t have a concept of how important it would be until I returned in later years.

There isn’t much healthcare around the area, that’s if you can afford it in the first place. So if your baby shows symptoms of malaria, well, his or her fate may be in the lap of the gods rather than the healthcare system.

On one of my trips, we had managed to bring lots of drugs over to dispense, for free, to the local doctors and nurses. Antibiotics that you may stockpile without thought in the back of your bathroom cupboard can go a long way to saving a life out here. Paracetamol, aspirin; your handbags are probably full of medicines that could be the difference between life and death in one of the poorest places in the world. 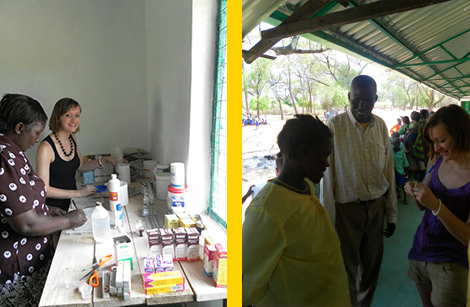 With a British doctor travelling with us, we intended to hold a mother and baby drop-in clinic, to check on the health of some of the youngest and most vulnerable members of the tribe. When we arrived in our bus, the queues of people desperate to be seen stretched into the hundreds.

There were people pushing, babies and children crying, and, at first, it was difficult to keep order – and the advert I’d seen on the TV came to mind. Initially, I felt overwhelmed at the sight of so many people wanting our help. I felt humbled and ashamed at how we take our own healthcare system for granted, and also felt very scared about having to turn people away.

But, with the help of local volunteers, we were determined to see everyone. We managed to create makeshift medical records for everyone, weighed hundreds of babies and children, and dished out free, simple medication to those who needed it. The team worked tirelessly for hours and hours in the shade of the clinic, until every last person had been seen.

The work we had done was thrown further into focus for me when I became very ill in Kenya myself with blood parasites (a precursor to malaria)– perhaps not life or death, but not far from becoming that. Bundled into a car, treated quickly and in a hospital, I was soon out of danger; had I been a tribeswoman without funds or access to a doctor, it would inevitably have been a different story.

It’s wrong that there should be people in the world for whom medical aid is not an option when they need it. It may seem like the other side of the world, but babies are babies, and every single one deserves the chance to grow up to lead a long and happy life.